Georgetown University Law Center professor Philip Schrag’s review of Failing Law Schools is not at all the gyokusai attack on the critics of legal education that Lawrence Mitchell’s op-ed was. I even suspended my contrarian urges long enough to agree with parts of it. You can read Brian Tamanaha’s response, along with LawProf’s. Theirs cover most of the issues, but there are a few remaining that I feel the need to go into.

I’m going to break this process into more than one post. Today’s is a quick counterfactual history of legal education without IBR, Grad PLUS Loans, and nondischargeable private student loans. The world as it was in 2004.

Why do this? Because Schrag believes IBR renders law school cost issues irrelevant (and if you think subsidizing it is unsound, well, we subsidize a lot of things). The bigger problem for Schrag is how we license lawyers, which I think Tamanaha acknowledged on pp. 176-77 of his book.

So what would’ve happened if the student lending laws went unchanged since 2004?

(1)  No Grad PLUS Loans means most private law school students would’ve had to rely on private loans.

(4)  Lenders would be more suspicious of legal education, leading to even more forceful demands for transparency on employment outcomes and higher interest rates.

(5)  Certainly middle-range to low-end private law schools’ tuition hikes and expansions (including branch campuses) would have been curtailed.

In our universe, the real breakpoint period is in the 1990s, when private law school tuition began to permanently exceed Stafford Loan limits after their 1994 increase. 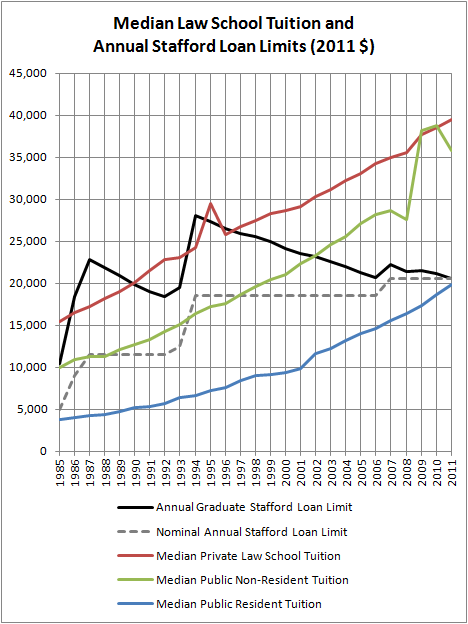 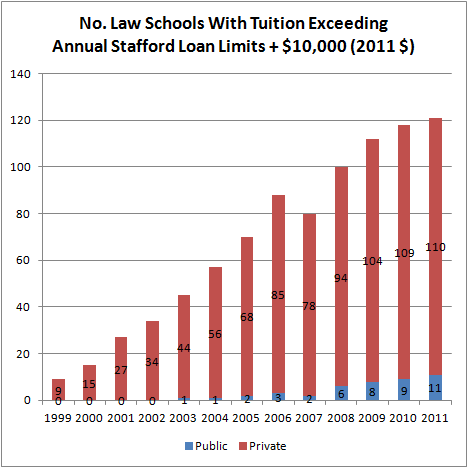 God only knows how these people paid for their living expenses (I lived on savings). Also, to answer your question: Yes, I’m psychotic enough that I ordered back-copies of the Official Guide going back to the 20th century. What’s really surprising is that I’ve managed to find such an interesting use for them so quickly.

What’s strikes me is how rapidly the law school unaffordability problem grew. In six years, nine law schools that required significant supplemental financing grew to 70 by 2005, and as a result, I’m not sure I believe the counterfactual history myself. Maybe law school tuition would’ve kept going up everywhere no matter what? Would private lenders have realized that their loans wouldn’t be repaid? Would they have cared? How many law school debtors would’ve filed bankruptcy if they could have? I regularly criticize arguments from incredulity, so maybe things could’ve really turned out better, just not for law schools.

This is why I’m not persuaded by Schrag’s argument. Conservatively, I think if we went back to the 2004 system, private lenders’ reluctance would cut away needless waste on law schools without any loss to students, taxpayers, the profession, or the economy.