The asserted combination of very high debt repayment obligations and, for most law graduates, salaries that are far below those offered by large corporate law firms, are at the heart of Tamanaha’s warning that “law school is not a secure path to financial security.” The future of the employment market for lawyers is, of course, cloudy, though many experts think that the prospects for the Class of 2011 represented the bottom of the curve and that there will be some recovery in the years to come.

It’s good news if experts are correct that the market is about to recover, but just how is the legal sector doing exactly? In fact, the Bureau of Economic Analysis revised its data on America’s National Income and Product Accounts in November, which is what I prefer over experts, who, honestly, I suspect are only interested in the bond market to large law firms. Not saying they’re wrong, but I trust government data to give the broad picture. Last year, I wrote about the budding recovery in demand for legal services in 2010. Turns out the BEA revised it negative. Very negative.

And as I’ve argued for a while now, the legal sector has not kept up with the U.S. Economy. 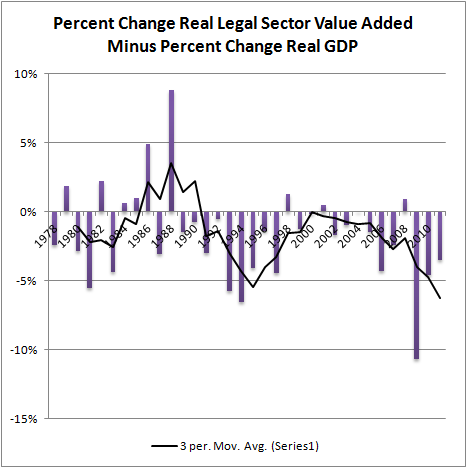 Maybe the BEA will revise 2011 upward next year?

The nagging question is how much of the Great Law Depression is cyclical and how much structural? To the extent it’s cyclical, a lot of people who’ve graduated from law school in recent years would have had jobs but don’t, and to the extent it’s structural, a lot of people never would have had lawyer jobs. Depending on how much the price level of legal services changed over this time period, here are a few projections:

The conservative estimate says it’s down $25 billion in output, but if the recession caused the rise in the legal sector deflator, then it should be 40 percent higher than it really is. Here’s what I mean.

While it’s tempting to believe the price increases over the inflation rate over the decades is due to greedy lawyers (or student loan debt), it probably has more to do with income elasticity of demand for legal services. Put simply, people spend their last dollars on legal services, not their first. People who are too poor to buy land don’t need wills; people who don’t get married can’t afford a divorce; and people who get arrested and can’t afford a lawyer will use a public defender. Fabulously wealthy corporations, by contrast, can always waste money on lawyers, just not enough to employ everyone who has a JD. This is a minor theme of this blog: Those who want more affordable legal services for the poor are well advised to either pay for it out of their taxes or fight poverty directly. Forcing lawyers to do more pro bono work or shaming them into opening doomed practices simply will not work.

As for the total compensation of jobs in the legal sector, it’s not been very good either:

Of course, this uses the GDP and legal sector deflators, so the comparison might be inaccurate because the purchasing power of employee compensation should be the same regardless of what sector the employee happens to be in. Just using the GDP deflator, here’s what it looks like going back to the Depression.

The legal sector’s total compensation pool has still not been positive in recent years, so I’m incredulous that grads with even higher debt levels will higher incomes than in the past.

Speaking of employment, the BEA tracks that too:

According to the BEA, “persons engaged in industry” is the sum of full-time and part-time employees and self-employed workers, which indicates that the uptick in 2011 is exclusively in the self-employed. I’m not sure how reliable this estimate is, but it’s not a good sign for future law school graduates.

So, if the legal sector is set to rebound as the experts say, it has a very, very long way to go. It’s certainly not a persuasive reason for people to go to law school now at current prices.