It’s the season for the LSTB’s perennial full-time private law school tuition projections. This is the third year I’ve made such projections, and I always try to improve the methodology to produce accurate and precise forecasts. The biggest changes this year are a large increase in source data—last year I scoured the Web for older copies of the ABA-LSAC Official Guide to the ABA Law Schools (Official Guide)—and I’ve improved the projections methodology.

In previous years, I forecasted future costs via linear regression based on law schools’ previous prices. I chose this model because it offered the lowest average costs, but it proved woefully imprecise. This year, I’ve changed to using law schools’ average annual (numeric) growth rates because it is both more accurate and precise than the linear regression methodology.

You can read about my test of the methodologies here.

As always, I exclude the two private law schools in Puerto Rico and Brigham Young’s tuition for LDS students. Unlike last year, though, I will not try to make projections for public-in-name-only law schools because there aren’t enough data to make reasonably accurate predictions. [Mini-update: The projections are in current dollars.]

Like last year, the “relative variance” column on the far right of the projections table is the percent difference between the law schools’ projected costs for 2012 (based on their 1999-2011 prices) and what they actually charged in 2012. The point is to provide an indicator for distinguishing between outliers and reasonably accurate projections. In 2012, the average private law school raised its price by less than in previous years, suggesting that going forward, costs will plateau. Here’s a chart of the distribution of tuition increases over the years. 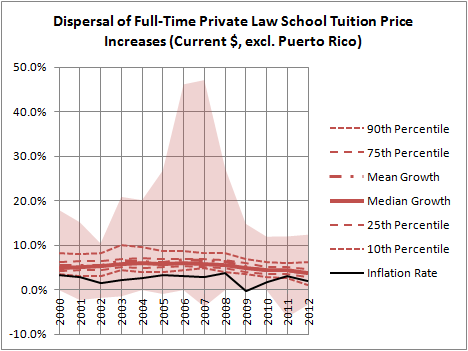 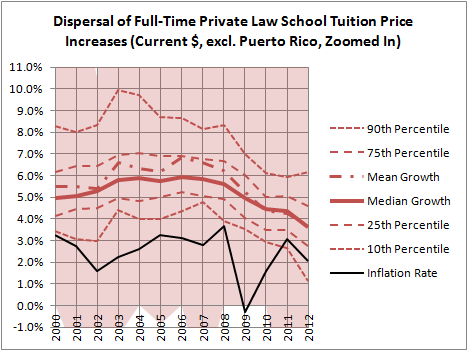 Analysis of the Official Guide data also shows that the percent of full-time students paying full freight has dropped considerably in the last decade:

It might be the case that the real tuition today are less for the median student than a few years ago, but it’s still important for people to know that law schools will continue to depend on students who pay full freight. Because it’s harder for them to choose to drop out, 2Ls and 3Ls are especially likely to be asked to shoulder higher costs as their scholarships are rescinded.

The Official Guide data can be found on the LSTB data page, which I’ve updated to include the 1999-2000/2003-2004 academic years and inflation-adjusted tuition instead of percent increases. Okay, here are the projections. Enjoy.