…And that’s just the government loans.

Forget Erwin Chemerinsky’s and Carrie Menkel-Meadow’s NYT op-ed, the real news is the Congressional Budget Office’s baseline projection of the federal student loan program for FY 2014-2024. Notably, it thinks that over the next 11 years the government will lend out another $1.3 trillion in direct loans and that it’ll even make $1.10 per dollar lent. $115 billion of that will be Grad PLUS loans (9 percent).

Federal law requires the CBO to account for student loans by comparing the net present value of federal loans to investing in government debt. It doesn’t make a lick of sense, and the CBO would rather use fair-value accounting to evaluate the loan risk, so its hands are tied behind its back.

…But that doesn’t mean we can’t laugh at its absurd projections for Grad PLUS loans, about 30 percent of which go to ABA law school law students.

For one, the CBO believes that the government will make more than $1.30 on the dollar from Grad PLUS loans. 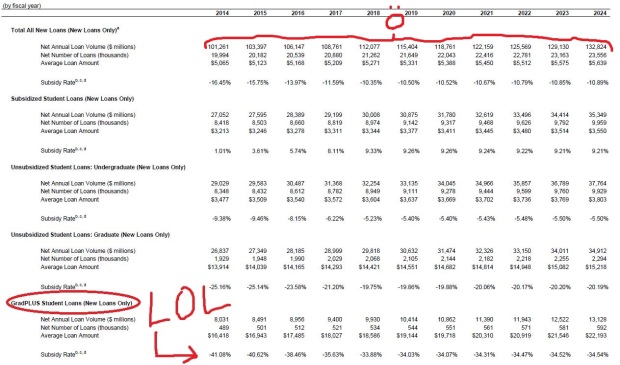 In the real world, most people who take out large balances of Grad PLUS loans will use IBR and then cancel their loans after 20 years. I’d be very surprised if non-law graduate and professional students counterbalance the losses the government will take on these loans. Another prediction I don’t think will pan out is the increase in the average amount borrowed and the number of borrowers.

The other fantasy is subtler: The CBO expects interest rates to spike over the next few years. By 2018, students will be borrowing at the maximum legal interest rates because either the economy will recover magnificently, or the bond vigilantes will finally come and stop lending the government money. (Then, of course, there would be a run on the dollar, export demand will spike, and we’ll return to full employment, but that’s off-topic.)

If you do the math, on a 10-year repayment plan (which is used for calculating 20-year IBR monthly payments), law students entering today will pay a maximum additional 5.3 percent in interest for their 3L Grad PLUS loans over their 1L ones this fall. In other words, the CBO predicts law school’s costs will increase even as schools flatten or cut tuition.

Last month I wrote an article for the The Am Law Daily about the After the JD project, a longitudinal study that measures employment outcomes for people who passed the bar exam in 2000. I thought it might be interesting to offer, as an appendix, the Official Guide‘s employment outcomes for Y2K law grads (they’re in the ’03 edition). Obviously, this isn’t a perfect fit as some people who passed the bar in 2000 graduated earlier, but the overlap should be fairly significant.

Back in those days, though, the Official Guide wasn’t the treasure trove of knowledge that the ABA’s employment questionnaire reports are now, and it’s certainly not as detailed as the After the JD’s information is. However, for those interested in getting a sense of the legal market many of the After the JD cohort entered into by law school, look no further.

To conserve blog space, the tables will follow the jump.