…Then it must have popped conclusively, as Quartz puts it:

Law schools aren’t just facing a momentary downturn. The industry has to deal with the fact that the world simply needs far fewer lawyers.

Technology, a shift to flat-fee contracts from billing for time, and globalization have shifted the salary and employment math for students considering law school forever. And the impact has trickled down to law schools, particularly those schools without premier brands or support from large universities, according to an analyst note from Moody’s.

It’s official: The law school bubble has popped. What was once a thriving, almost sure-thing is now becoming a risky and increasingly unattractive option for thousands of college grads.

Factors such as shifts in technology, billing methods, globalization and the unavoidable cuts caused by the sub-prime mortgage crisis have meant that the profession isn’t as flourishing and lucrative as it once was.

Problem number one here is, in my opinion, that these articles improperly treat Moody’s conclusions as established facts. They should be saying that Moody’s believes outsourcing, etc., is making law practice less lucrative. Just because it says it doesn’t make it true. Although, the PolicyMic article cites the million-dollar-law-degree paper via Wonkblog as fact as well, so that one’s just a mess.

What’s also curious is the credibility these sources extend to Moody’s—and set aside the whole they-said-those-mortgages-were-AAA+++aaa+ stuff. Moody’s opinion is notable, but it’s not gospel and it’s certainly not the officially designated bellwether for when any bubble pops.

On top of that, Moody’s ominously titled, “Law Schools Challenged to Adapt to Fundamental Changes in the Legal Industry” (pdf), offers a thin argument that:

Like many industries, the legal sector is undergoing notable change driven by multiple factors, including technology and globalization. The move from per-hour billing to flat-fee contracts also negatively affects the demand for lawyers. On April 9, the American Bar Association (ABA) reported employment statistics for the Class of 2013, nine months after graduation. The unemployment rate increased to 11.2% from 10.6% and 9.2% for the prior two years, respectively. (2)

Moody’s doesn’t prove the connection between technology, globalization, and outsourcing and the ABA employment statistics, and it doesn’t quantify the extent to which those factors even exist much less influence the legal sector itself. Nor does it show that people are choosing not to apply to law school because of those factors.

Regular readers will recall that the law school “tipping point” probably occurred four years ago, and I think back then even Big Debt Small Law emphasized graduates falling into doc review jobs more than “technology.” Indeed, I suspect the Moody’s paper is guilty of substituting its own prejudices for non-applicants’ thought processes.

None of this is to say that technology, outsourcing, flat-rate billing, etc. aren’t real phenomena or will be in the future; that’s not my point. It’s just that, contrary to Moody’s argument (if you want to call it that), they haven’t had a measurable effect on the legal sector yet. If they had, then we’d expect legal sector labor productivity to rise rapidly and lawyer jobs to collapse before the number of applicants began falling in 2011. 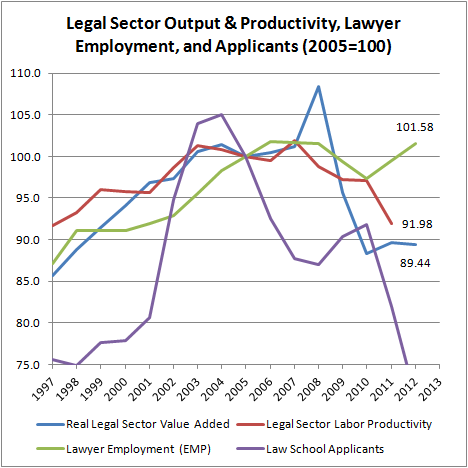 Instead labor productivity in the legal sector has fallen since the Great Recession and while lawyer jobs are scarce (especially entry-level ones), it’s not like hundreds of thousands of attorneys have disappeared. The lawyer luddites haven’t arrived yet.

And by the way, if you want to say that the techno-outsourcing jobs aren’t in the legal sector, then that’s nice and I’d love to see your data, but it’s not Moody’s argument.

You can pick at Moody’s quartile analysis of law school employment outcomes, but I don’t think anyone seriously thinks that the legal sector will start generating substantial demand for new law grads anytime soon. It’s also unlikely that demand for legal education will come back either, which makes the bulk of the report unobjectionable. I just can’t believe Moody’s analysts get paid to write reports without citing any evidence of the forces they claim are influencing law applicants.

Strike that. I can believe it.