The Bureau of Labor Statistics (BLS) usually completes its updates of its many measures of occupational employment for the previous year by April. Data for 2016 are now available, allowing a comprehensive summary of lawyer employment for that year. For detailed discussion of what the BLS datasets are and how they address lawyer employment, I recommend the lawyer overproduction page [updated!].

For context, according to the Current Population Survey (CPS), the number of people who reported working as lawyers in 2016 shrank 2.3 percent to 1,133,000—about where it was in 2014. The CPS also estimated 745,000 people working as lawyers on a wage or salary basis, a 7.2 percent decline from the previous year (-58,000 lawyers). This change is plausible because in 2015, the number rose 9 percent (+66,000) and could just indicate measurement problems with the CPS. By contrast, the more accurate Occupational Employment Statistics (OES) program found that the number of wage-and-salary lawyers grew by 1.6 percent last year to 619,530 (+9,600 lawyers). The number of employee lawyers in the legal sector grew only a negligible 0.7 percent to 382,730 (+2,550).

Employee lawyers’ incomes were flat again in 2016. The OES estimated a scant 0.7 percent median hourly wage growth, although the CPS registered a -0.7 percent median weekly wage increase. Going by the OES, the last peak for lawyers’ earnings was 2009 (~$125,000 annually); incomes are about 6.7 percent lower (-$8,400) in real dollars since then. Here is an annualized dispersion. 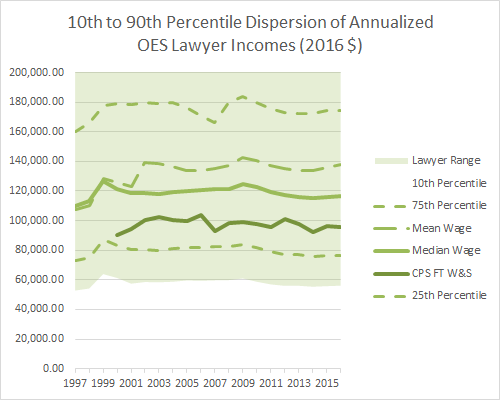 These lawyer employment and income measures are not strong bellwethers for the value of legal education because they include many established lawyers and don’t measure recent graduate outcomes particularly well, especially those of graduates who do not promptly start careers in law. Readers seeking insight into that topic are instead advised to look at my criteria for predicting improvements in law graduate outcomes and the lawyer production page for a clear discussion of the BLS’s Employment Projections program.