The OMB classifies direct loan accounts as financial assets totaling $1.281 trillion in 2017, but careful readers of these reports will find that OMB has now combined direct loans with “Troubled Asset Relief (TARP) equity purchase accounts.” No reason is given, and these items don’t appear related. In prior years TARP amounts have been negligible, so I’ll continue this series, assuming these TARP accounts make no impact. According to the office’s projection, by 2028 this figure will grow to $2.126 trillion—66 percent growth. 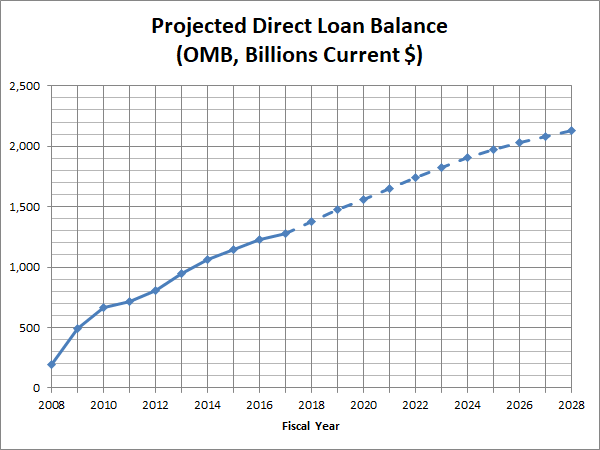 As with previous years, the current (2017) direct loan balance is below the OMB’s past projections, but not by much. For example, in FY2012, it predicted the balance would be $1.593 trillion by 2017, $312 billion (24 percent) higher than what actually occurred. Here are the OMB’s direct loan projections going back to FY2010. 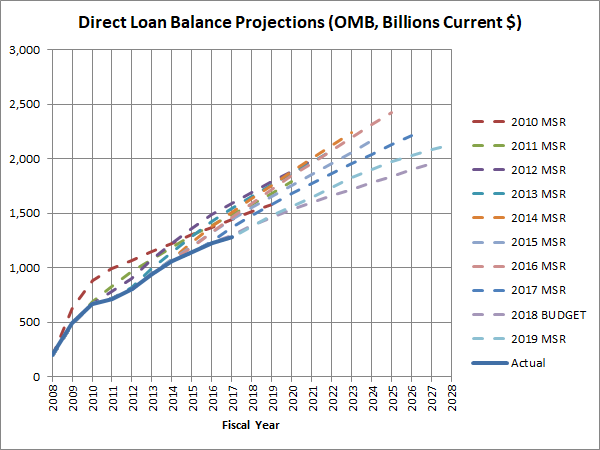 As with last year, the OMB projects less student lending than during most of the Obama presidency. At the time, I noted that the projection came in much lower, but now it’s trending back upward. By 2028, federal student loans will reach $2.126 trillion. Because the OMB expects GDP to grow as well over this time period (we’d have bigger problems than student loans if it didn’t), the ratio of direct loans to GDP will level off below 7 percent over the next decade.

The OMB’s measure of direct loans is the net amount owed to the government, and the annual changes to that amount are not the same as the amount lent out each year to students. The Department of Education tracks its lending, which I discuss on the Student Deb Data page.

Past coverage of this data series: