Ahoy, readers! I bring good news: Now that we’ve endured a full year under the LSAC’s new regime of six LSAT administrations per year, I can now return to regular LSAT-tea-leaf-reading reporting! Woohoo!

But wait, there’s more! Because the LSAC now regularly reports first-time test takers (and it graciously furnished me with data from previous years) I can now provide even more detailed tea-leaf reading! I’m especially pleased because for the first time in a while, a law-school data-collection organization has changed its methods in a way that I approve of with no drawbacks. Think about that when you see The Matrix: Defragmented when it comes to theaters.

As you may suspect, the ratio of first-time takers to total tests administered has fallen since our last trough period of December 2014. Back then—and this analysis applies to the moving sum, not the actual administration—it was 62 percent, but in June it was 55 percent.

Editorial: The Trump bump appears to be fading fast, but more surprisingly, the number of first-time test takers has fallen quite a bit since last year. It be because counselors are still adjusting to the new six-administration structure, i.e. college students didn’t know about the July option, which is a lot easier to study for than the June one. Overall, this trend is moving at a rate similar to the law-school crash years, e.g. Sept./Oct. 2012. Moreover, test takers are much more tenacious about retaking the exam than they were even five years ago. It’s a new breed of prospective law-school applicant. I don’t care to read through the report on repeat test takers to see if their performance is improving, but it’s something that may interest scambloggers or academics.

That’s all from me. Enjoy your summers, readers!

It appears the LSAC backed down after I—and my very powerful allies—intimidated it into publishing its test-taker-volume information. Now I can discuss the number of test takers since last summer thanks to the LSAC’s return to transparency.

Okay, okay. Enough with the silliness.

Here’s the chart going back to the late 1990s. The July 2018 administration is interpolated between the June and September ones because there is no moving sum to base it on.

The LSAC is also now including first-time test takers in its data tables. This is one of my favorite datasets, but until now it only came out infrequently. Good on the LSAC for publishing it regularly. What we learn is that 41,104 people took the LSAT for the first time this summer. By contrast, in June and September of 2012 (the last year for which I have data), as many as 42,490 new faces took the test.

I’m not sure if we should read too much into that because of the expanded administration dates. First timers accounted for about the same amount of total test takers in June 2018 (69.2 percent) as in June 2012 (71.1 percent), and in July it was about the same as well (68.9 percent). Meanwhile, September first-time test takers differ quite a bit: 65.0 percent in 2012 and 60.8 percent in 2018. In fact this year the percentage of first-time test takers in September is the lowest on any records I have, and given that there were more than 10,000 fewer overall test takers in September of this year than last year, it’s a good bet that 0Ls are shifting their habits to July.

I’m glad to be able to use these data going forward though. Again, good on the LSAC.

In other news, law-school applicants and applications are continuing their climb. As of the end of the third week of November (the 21st of 2018), 16,071 people applied to a law school, submitting 82,012 applications. The data for the early period of the application cycle tend to be erratic, but this is 9.6 percent more applicants than in 2017-18 and 5.6 percent more applications. Last year (that is, November 21, 2017), these percentages were in the double digits, indicating the Trump bump is waning this year.

You can see charts of this on the LSAC’s Web site.

That’s all I’ve got for now. Peace.

I patiently waited for the LSAC to update its Web site so I could report on the start of the 2018-19 LSAT-administration year. And I waited. Then I waited. Then I saw that the LSAC’s Web site was revamped and was all excited to post about the number of people who took the LSAT, including first-time test takers, which was displayed for the first time ever.

Then I procrastinated a bit.

Then the LSAC locked its Web site from the peasants. 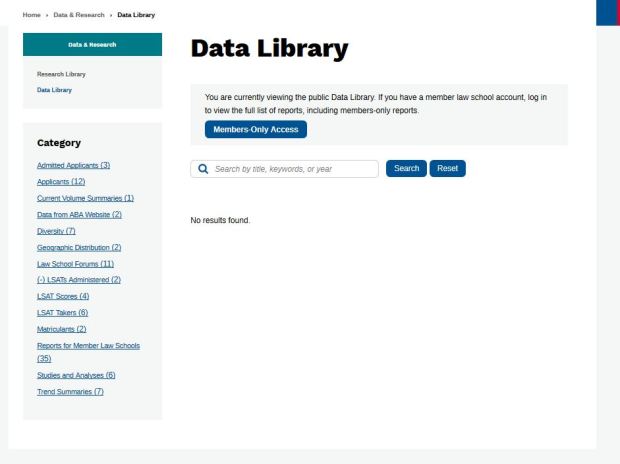 Seriously? The number of LSAT takers per administration has been publicly available in some form for decades, and now it’s too important for the public to know? Why? Since it’s been trending upward, why would the LSAC not want to publicize it?

The February 2018 LSAT administration marks the sixth in a row that has seen an increase in the number of test takers. This time, 24,335 people (+13.7 percent) took the exam, according to the LSAC. Here’s a chart of LSAT administrations going back to the late 1990s.

Although the effect of the 13.7 percent bump in February LSATs is muted by the overall low number of test takers, it’s still a large effect in itself. Every administration in the 2017-18 cycle has seen at least 10 percent growth over the previous year, which hasn’t happened since the 2009 calendar year or the 2001-02 LSAT year.

After the December LSAT, I discussed an earlier prediction that the Trump bump would diminish over this year. I think it’s still too soon to tell, and we may have another 10 percent jump in June. However, the Trump stuff is a one-time event and can’t really mark a sustained change in the future of the legal profession or the overall economy. The fundamentals haven’t changed.

For historical note, last year I remarked that there was no evidence of a Trump surge, but I did discuss how more people were sitting for the LSAT despite fewer people applying. I suggested that test takers were behaving more strategically than before. Consequently, it will be interesting to see where the higher number of applicants ultimately apply, particularly because law schools are still closing.

The number of December LSAT takers rose to 40,096 (+27.9 percent) from 31,340 last year. It is the sixth administration in a row to show positive test-taker growth. Here is what it looks like in perspective.

This is quite the acceleration, one of the fastest ever.

Two months ago I (idly) predicted this surge would diminish over the next year. That doesn’t appear to be where the trend is heading. Disturbingly, two of the aforementioned comparison administrations, fall 2009 and fall 2001, were recession periods, which indicates the kind of moment LSATs are in. I’ll repeat the same points for as long as this phenomenon continues: There is no reason to believe the legal profession will have more jobs compared to the rate of LSAT growth. Most of these potential applicants—let’s call them Sessions’ 0Ls—are badly misguided.

Since we’re on the topic of LSAC data, as of week 3, 2018, the number of applicants for this fall stands at 29,287. Week 3 was roughly the halfway mark for last year, so we may have about 61,000 applicants by August. This final applicant count has been falling in recent weeks, which I think is typical.

As before the renewed interest in law is almost certainly due to 0Ls’ belief that they can fight the good fight against CSA Attorney General Jefferson Beauregard Sessions III’s cruelties to minorities. Maybe, though, this blip will diminish into next year, depending on where the politics go. It’ll be interesting to see where these 0Ls ultimately apply. Presumably, the more idealistic they are, the more likely they are to apply to unheralded law schools. With any luck, they’ll be more pragmatic given that Indiana Tech and Charlotte are gone, Whittier no longer accepts applicants, and who knows how many are going to be destroyed by category 5 hurricanes?

I hope these 0Ls realize what kind of legal profession they’ll get into a few years from now. There’s quite a lag between taking the LSAT and being sworn in. The politics of today might not be the same as tomorrow (please don’t let them get worse). I’m just saying, fighting vile executive orders sounds a whole lot more exciting than processing people’s immigration forms. Not everyone gets to practice law as they like.

For those of you who were as curious as I about whether a secular trend in law-school interest was causing the uptick in LSATs, well, too bad! Count me in on the bandwagon attributing it to His Emolumence’s perfidy. I try to caution against reading the minds of potential law-school applicants, but what other explanation is there? In June 2017, 27,606 people took the LSAT, up an amazing 19.8 percent from a year ago (23,051). 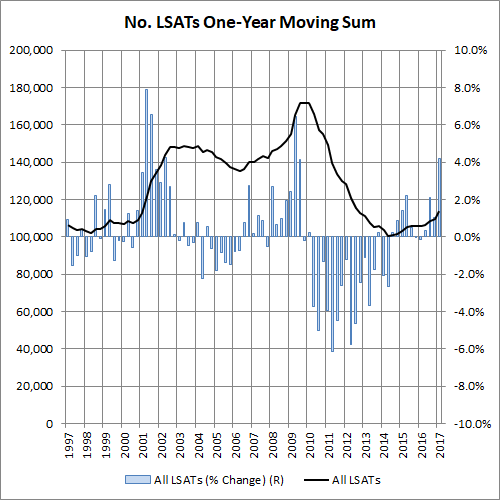 The four-period moving sum rose by 4.2 percent to 113,909, a record not seen since December 2012 (115,348). To put these numbers in context, the last time there were this many June LSAT-takers was June 2010 (32,973). You know, back when I first joined the crowed warning people that law school was usually a bad idea. In fact, the year-over-year growth rate is the highest going all the way back to 1988—the second year for which the LSAC reliably publishes LSAT-administration information. The 4.2-percent growth rate for the moving sum is comparable to December (4.1 percent) and September/October (6.5 percent) 2009 . If I had seen the June 2017 LSAT without knowing anything else, I’d’ve thought the economy was in a recession (or L.A. Law came on the air, which is what some claim caused the ’80s surge).

I note three more items. One, the LSAC sure released this information a lot more quickly than last year, when it took until August to tell us about the June LSAT results. If I didn’t know any better, I’d think it was happy to discuss good news…

Two, I acknowledge that the 19.8-percent LSAT jolt was leaked last week. Uh-huh. That’s consistent with the times…

Three, if the political cause for the renewed enthusiasm is true, then bless these LSAT-takers idealistic hearts. However, next to nothing has changed in the U.S. or legal economies since Inauguration Day to warrant a more optimistic outlook on the legal profession (unless you’re defending His Emolumence and his family, in which case, you’re probably teetering in the character-and-fitness department). Meanwhile, going by my predictions from earlier this year, it appears Congress is going nowhere, so don’t expect much reform of Grad PLUS loans. Instead, maybe Betsy DeVos will whip up yet another income-directed repayment plan. Or maybe she’ll get high on Ben Carson’s glyconutrients stash.

Final word: I can’t imagine the renewed interest in law school lasting as long as our dear leader’s tenure in office, but it may be a while yet.