The United States does not have too many lawyers; rather, it licenses more lawyers than there are lawyer jobs available, and the profession has a high turnover rate. The evidence for law graduate and lawyer overproduction at the national level is well documented. The most credible source is the U.S. Department of Labor’s Bureau of Labor Statistics (BLS), which in the 1996 edition of its Occupational Outlook Handbook (OOH) stated:

Even though jobs for lawyers are expected to increase rapidly, competition for job openings should continue to be keen because of the large numbers graduating from law school each year. During the 1970s, the annual number of law school graduates more than doubled, outpacing the rapid growth of jobs. Growth in the yearly number of law school graduates tapered off during the 1980s, but again increased in the early 1990s. The high number of graduates will strain the economy’s capacity to absorb them. Although graduates with superior academic records from well-regarded law schools will continue to enjoy good opportunities, most graduates will encounter competition for jobs. As in the past, some graduates may have to accept positions in areas outside their field of interest or for which they feel they are overqualified. They may have to enter jobs for which legal training is an asset but not normally a requirement. For example, banks, insurance firms, real estate companies, government agencies, and other organizations seek law graduates to fill many administrative, managerial, and business positions.

And 1996 isn’t an outlier. Subsequent editions of the OOH have characterized the market for lawyers with similar language, and there are more specific data sources I will use to illustrate the phenomenon of lawyer overproduction further down.

But first, this page requires context: Despite the evidence, many journalists, attorneys, bar authorities, economists, legal educators (certainly the loudest ones), and other commentators tend to deny lawyer overproduction for seemingly as many excuses as there are law schools. Here are a handful examples:

These fallacies and others have resurfaced regularly in legal education discussions since the data began trickling into the public consciousness in 2011 or so, and I am pessimistic that the zombie arguments against attorney overproduction will take the hit to the brain they desperately deserve, so I created this page to permanently showcase data I’ve used in the past. Also, researchers from both inside and outside law schools have asked me to explain these sources, so here they are in one place.

This chart depicts the following series from top to bottom:

I will explain each of these series and their sources.

This series is the cumulative number of people who received a license to practice law in the United States over the previous 35 years ending with the year shown, i.e. it converts the flow of newly licensed lawyers into a stock to facilitate comparisons to employed-lawyer counts. An important advantage of this series is it includes people who were licensed without attending an ABA-accredited law school. It is pieced together from two sources:

This series does not try to estimate lawyer mortality by actuarial methods because it would be tedious and probably would not make a big difference. Similar efforts appearing elsewhere might use a different moving sum (e.g. 40 years), but the size of the moving sum generally doesn’t affect the relationship between the number of lawyers admitted and the comparatively few number of jobs available. Note, though, that this series contains an unknown number of foreign-trained lawyers who returned to their home countries some time after obtaining a law license in a U.S. jurisdiction.

Similar to the 35-year moving sum of admitted lawyers, this series as merely the moving sum of the ABA’s estimate of the number of people who graduated from an ABA-accredited law school over the previous 35 years inclusive. The data come from the ABA’s legal education statistics page and the “509 information reports” the ABA now provides in lieu of a paper Official Guide.

The advantage of this series is it shows that there are more people who have gone through an ABA program than there are lawyer jobs available. Its disadvantages are that it includes people who never passed a bar exam and people who had no intention of practicing law upon graduation. Again, mortality rates are not accounted for.

The ABA surveys state bar authorities to determine the number of lawyers who are considered active and resident in the state. It can be interpreted as the number of licensed lawyers available to work should demand for lawyers increase. A disadvantage is that some lawyers might be active nonresidents. The source for this series is the ABA’s legal profession statistics page.

The Current Population Survey (referred to elsewhere as “the household survey”) is sent to 60,000 households in the United States every month. The BLS estimates the number of lawyers based on the survey results. The CPS’s primary advantage is that it includes self-employed lawyers and those holding multiple lawyer jobs. It might not reach enough lawyers to produce an accurate estimate. Indeed, in a few years shown, the CPS managed to find more lawyers than were registered as active and resident according to the ABA. Nevertheless, BLS economists have told me it is the preferred measure because the agency’s other surveys don’t capture self-employed lawyers (which I don’t think is actually true).

Not all the CPS data on lawyers are available online. I obtained the data from 1983 to 2002 by contacting the BLS. Its economists informed me that the CPS changed some of its occupational classifications some years ago, but I doubt it affected lawyers. More recent data are available on the CPS’s Web site.

The BLS measures the number of lawyer jobs in the economy in its Employment Projections program. Importantly, this is a measure of jobs, not workers like the CPS. The base year estimate is derived from the Occupational Employment Statistics (OES) survey and Current Employment Statistics (CES) data. The EP program also includes self-employed workers from the CPS in its estimates.

The EP program estimates the number of lawyer jobs that will exist ten years from the base year based on current employment patterns. It includes new positions that will be created annually by economic growth (50,100 by 2028), and it estimates the number of jobs that will open due to lawyers leaving the occupation (406,900 by 2028). Since 2016, the BLS changed its methodology from an indirect measure of retirements to one that includes everyone who changes occupations, both exiting the labor force and switching jobs. As a result, the BLS data show more job openings—and much more turnover in lawyers. Of those 406,900 lawyers who will leave the occupation this decade, 182,000 will leave the labor force and 225,000 will change careers (27 percent turnover). High turnover increases the risk that law school will be a poor investment.

Although the CPS and EP program produce divergent results, the projections are still a valid measure of future lawyer job openings. Therefore it is useful to compare EP program projections to the number of licensed lawyers, law graduates, and active and resident lawyers. Indeed, the BLS itself does so in the OOH.

The EP program’s FAQs and methodology are worth reading for greater understanding.

As stated above, the OES survey and CES data track the number of lawyer positions in each industry. These numbers are more accurate than the CPS because the surveys they’re based on sample a large number of employers. However, because they exclude self-employed lawyers, they are not useful for overproduction analysis. I sometimes use them in different contexts though.

The BLS has been estimating future lawyer job openings for many years, and most of the projections are omitted from the chart above. Here is a chart depicting past projections of the number of lawyer jobs. 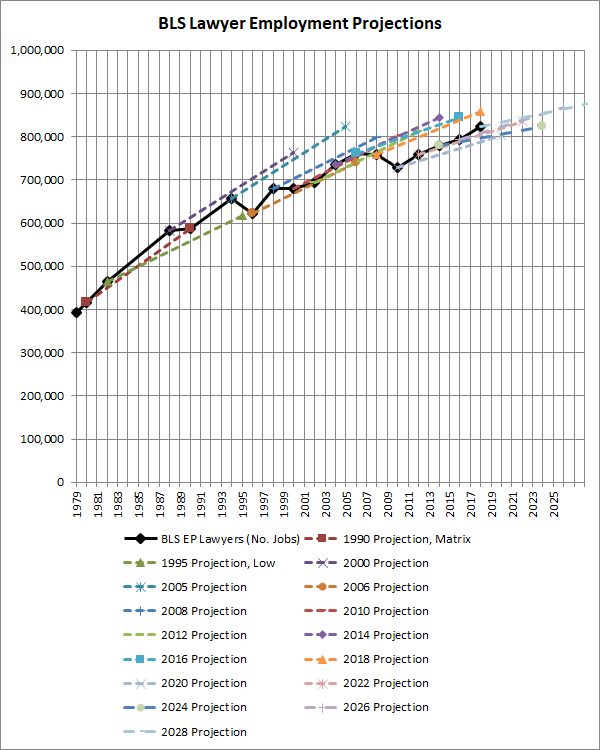 These employment estimates and projections are pieced together from previous issues of the OOH and another BLS publication, the Monthly Labor Review. Some can be found on the Wayback Machine. If you look carefully, you can see that the projections tend to overestimate the number of lawyer jobs that eventually exist ten years later. However, in the last several cycles, the gap has narrowed.

The Future of Lawyer Overproduction

As of this writing, the number of law school applicants has declined to levels unseen in decades. With fewer enrollments come fewer graduates, so a smaller proportion of future licensed attorneys will be unemployable as lawyers. The impact of collapsed law school enrollments on the supply side of the lawyer overproduction phenomenon is undeniable.

As stated above (and because it’s relevant), some commentators will suggest that a large wave of lawyers will retire in the near future, which will create job openings for graduates. It’s true that the median lawyer has aged. According to the ABA’s legal profession statistics page cited above, in 1980 the median lawyer was 39 years old; in 2005 he or she was 49. An aging profession isn’t a good indicator for its future because it means that many lawyers in the recent past either could not enter the profession or didn’t believe it was worthwhile to remain in it. A retirement wave in itself certainly doesn’t mean the median age will fall rapidly and accommodate recent graduates. There are two reasons. One, lawyers can easily work past normal retirement ages, and two, it’s possible that many lawyer vacancies will simply go unfilled.

The demand side of lawyer overproduction, by contrast, is less clear. I am of the opinion that demand for lawyers is more sensitive to household income and wealth than other occupations. With per-capita employment levels declining since 2000 and real wages having fallen since then as well, it’s likely that many younger Americans will lack the purchasing power or wealth needs to hire attorneys. The wealthy’s legal needs are already being met. Young Americans’ student loan burdens won’t help either, even with the advent of income-sensitive repayment plans. On the other hand, I don’t believe technology and outsourcing will have much of an effect on demand for lawyers given that legal sector productivity has been stagnant for many years already, but that’s a different article.

If you’ve read carefully, I haven’t discussed why lawyer overproduction occurs. The answer is … my thoughts aren’t set in stone yet, and this page has already covered enough ground. What I can predict with more certainty is that the zombie arguments against lawyer overproduction will continue to shamble forward.