Full-time tuition costs at private law schools rose an average 2.7 percent before adjusting for inflation. The rate is about 1 percent higher than the last two years’ increases, but it’s still below the typical 5 percent rate before the Great Recession. I focus on private law-school tuition because public law schools receive varying degrees of state subsidies, so they do not reflect the already distorted legal market’s prices.

Here’s what the dispersion of full-time private and full-time public (residential) tuition looks like going back to 1996: 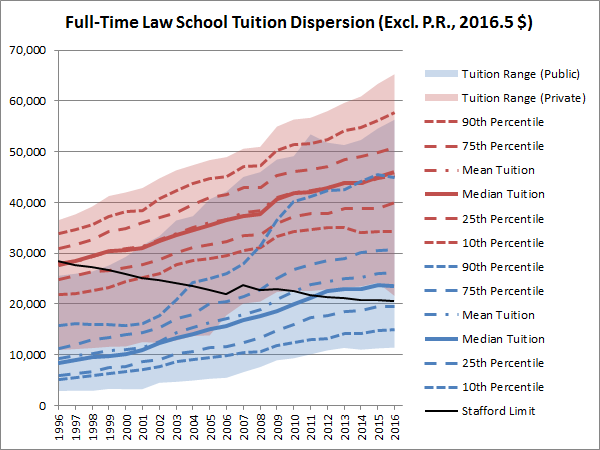 I don’t have much to say about this that I haven’t before, but it appears that the 25th percentile public law school will soon charge more than the Stafford loan limit, which has been set at $20,500 for several years now. The limit is important because it indicates when students will need to rely on other funds to pay for their legal educations, including Grad PLUS loans, which can also go to students’ living expenses. Since 1996, Stafford loans have lost about a third of their value to inflation.

Notably costs are still widening, so after chopping up the law schools into quintiles, here’s the increases for the mean of each quintile. 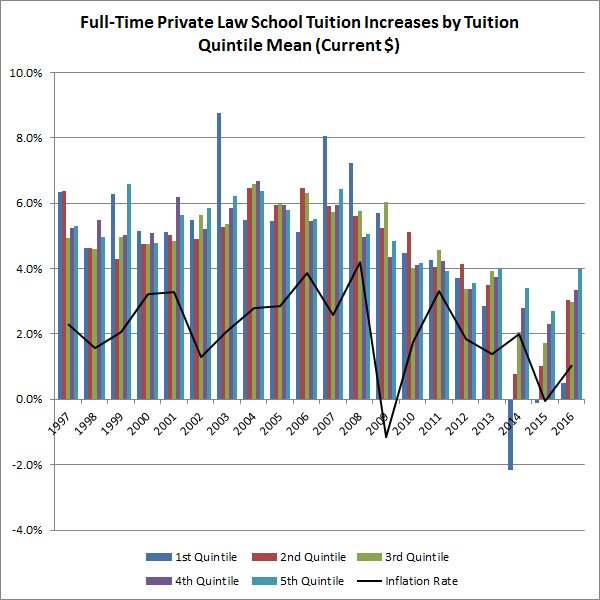 Yes, I notice that two failing law schools, Indiana Tech and Charlotte, both dealt with their incipient problems by slashing and hiking costs, respectively. For Indiana Tech, it didn’t translate into more matriculants.

Finally, 19 public law schools cut or held their residential tuition with the two most notable ones being Texas A&M (-15.4%) and UC Hastings (-9.1%). Akron, Cincinnati, and Toledo also didn’t raise their tuition, so along with Capital and Dayton that makes five of nine Ohio law schools that stand out in tuition control.

Full-time tuition costs don’t necessarily indicate what students are actually charged, but they do show how much rent law schools can extract from the government’s loan programs. For many law schools that ability is fading.

Information on this topic from prior years: