[An evaluation of these projections can be found here.]

[Readers and researchers have used the tuition projections in the past, and rather than overwrite them with new ones, this page archives them.

Due to changes in the methodology discussed in this post, I have added an appendix containing revisions to the projections.]

When it comes to law school tuition increases the first question is: does inflation-adjusted tuition increase at a linear or exponential rate? Looking at the ABA’s tuition data going back to the 1985-1986 school year, it appears linear. 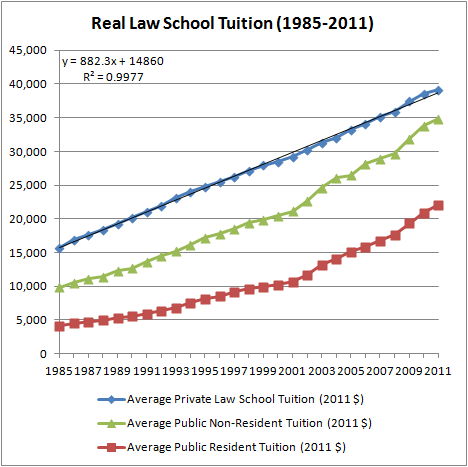 You get the same effect from using the ABA-LSAC Official Guide to ABA-Approved Law Schools. 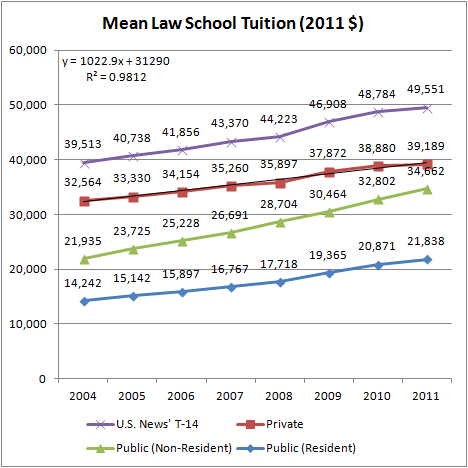 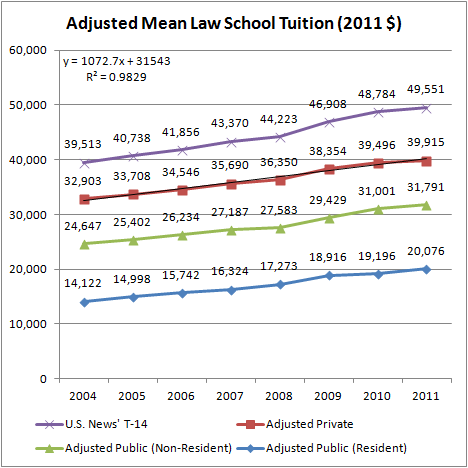 Why law school costs more than before shouldn’t be too difficult to figure out: legal education isn’t a free market service. It’s heavily subsidized by the federal government, allowing law schools to charge whatever their competitors are charging. Hopefully I’m right in the long run, or things will get far worse: taxpayers will be left with the tab of subsidizing income-based repayment plans for law students whose degrees were overpriced relative to their labor market value. Those ineligible for IBR will require debt relief at some kind.

As a result, we can calculate law school tuition going into the future. These charts project private law school tuition five and ten years from the last years in which data are available. They are based on linear regression of the law schools’ individual tuitions from the school year ending in 2005, courtesy of the Official Guide. My methodology assumes that a law school’s tuition will increase largely as it has in the past. Note, the Official Guide and the ABA generally define school years as the year of the fall semester, so “2004” refers to the 2004-2005 school year, in their calendar. In the past I included both years or referred to a school year as the year including the spring semester, so “2005” in the previous example. I am adapting to the ABA’s convention.

The methodology I use has its drawbacks, particularly for law schools that increased their tuition rapidly between the 2004-2005 and 2010-2011 school years. Faulkner University is by far the greatest culprit because it received ABA accreditation in 2006. Since then its tuition doubled. Another anomaly is Vermont Law School, whose tuition rose an unusually high 22% in the 2008-2009 school year. Conversely, the law schools at the bottom of the list, Pontifical Catholic, Brigham Young (LDS), and Inter American do not increase their tuition as rapidly as most private law schools. These projections are not adjusted for inflation.