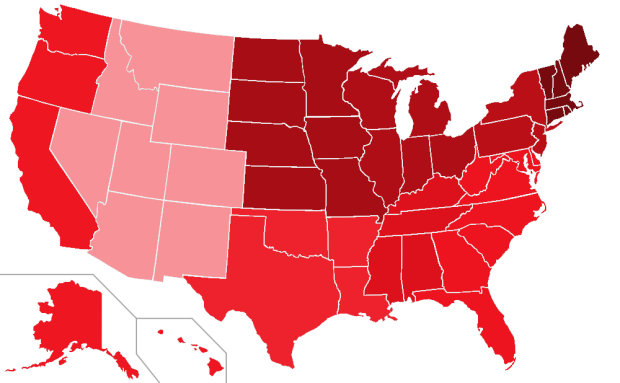 This page tracks law graduate overproduction as of 2009 by contrasting state government lawyer job creation projections with ABA graduate data from the Law School Admissions Council. Link to original post here. At the national level, the BLS reports that the economy will create 240,400 lawyer jobs between 2008 and 2018 while the ABA law schools alone will produce more than 440,000 new law graduates. These data are meant to depict where there are too many law students and should not be confused with applicants per job in various locations. There are a few limitations to the data:

(2) The sum of the state replacement projections does not come close to the federal government’s projection. More below.

(3) South Dakota does not provide any data, but it can’t have any more than 2,000 employed lawyers in 2008. My guess is its projections should be similar to North Dakota’s and Montana’s.

(4) Overproduction assumes every graduate works in the state he or she attended law school. This obviously isn’t true. It’s also theoretically possible that some law schools deliberately “underbid” those in other states, i.e. cheaply producing better lawyers and exporting them to undercut local law schools. I dismiss this hypothesis as dubious given tuition rates, and ultimately it doesn’t matter. The oversupply problem wouldn’t exist if there were clear attorney shortages to compensate for surplus production in other regions. The following results demonstrate only two states “underproducing” lawyers: Alaska and Nevada, but those two can’t possibly absorb the tens of thousands of excess law graduates produced per year elsewhere.

On the other hand, there are two pieces of good news:

(a) the 2008 employment numbers are close enough between the states and the national government that they look like they include self-employed attorneys (solos and partners), and

(b) The BLS assumes the economy will be at full employment by 2018, so as far as overproduction is concerned, we need not worry about today’s underemployed attorneys whom the BLS predicts will be employed doing something else (though that says nothing about their student debt and whether they’ll be gainfully employed at all).

You’ll note that the USA is supposed to add 24,040 lawyer jobs per year even though adding the individual state entries in the third column equals only 19,470, a deficit of 4,570 lawyer jobs per year that I highly doubt are all in South Dakota. The lower state sum means that the economy will gross only 194,700 lawyer jobs by 2018, and the national graduate to job ratio will be 2.3. The difference between the state sum and the national projection is important because the national number implies a 45.4% reduction in enrollments (~90 law schools) to stabilize the system while the former state number implies a larger 55.8% enrollment reduction equal to about 109 law schools. For stats wonks, the median state surplus is 215, the mean 479.55, and the standard deviation 632.23.

To spare you another table, here’s a chart listing the graduate to job ratio:

And for an appendix, here’s a table of the states by employed lawyers, growth rates, net jobs between 2008 and 2018, and the average annual job openings.

I include the “Difference” at the bottom to alert readers to the fact that while the 2008 employment numbers largely correspond between the states and the BLS (which I suspect excludes Puerto Rico), the 2018 employment projections simply do not line up. The federal government predicts 5.2% more employed attorneys than the states do, as well as a much faster growth rate. I’ll bet there’s a state government or two in there that’s not counting self-employed attorneys. If not, let’s hope the BLS is right and state governments aren’t because that’s 45,700 more graduates who will never see the inside of the legal profession.