…Because the ABA’s standard 509 information reports no longer track them, which reminds me of the outrage directed at the ABA last summer for rubber-stamping one law professor’s vision for collecting and displaying employment data to the masses. For those into the cloak-and-dagger stuff, the Data Policy and Collection Committee was folded into the Standards Review Committee earlier this year, and it “reevaluated” the annual questionnaire it sends to law schools. You can read about it here (docx).

One of the bigger changes is eliminating the distinction between part-time and full-time law students wherever it could be found except in tuition costs (thankfully) and scholarship awards. This means that law schools that admit large numbers of part-time students, who tend not to do so well on the LSAT, can see their average LSAT scores nosedive. Also, instead of tracking calendar-year applications, offers, and matriculants, the reports now only measure October-October applications, offers, and … enrollees? Makes them sound like participants in unethical science experiments, but at least spellchecker can tolerate them.

Naturally, as someone who tracks ABA law-school data longitudinally going back to the Clinton administration, I think these changes are monumentally stupid, especially eliminating the full-time/part-time distinction. However, the ABA rarely announces these decisions openly and doesn’t have some kind of RSS feed for those of who care to track it. That’s probably an even dumber mistake.

So, going forward, when it comes to my first annual 509 post on law school … enrollees, I will use data for all law students. I’ve been able to reassemble the data going back to calendar-year 2011, but obviously the change in the data-collection year from “calendar year” to “admissions cycle” will distort the results somewhat (I doubt there are too many October-December enrollees). Too bad. Yell at the ABA.

In other words, aside from thinning the law-school herd, 2017 isn’t that different from 2016.

Sorry this isn’t as complete as in past years. I can’t spend a whole weekend hand-coding Official Guide info going back another twelve years.

Applicants showed trivially more interest in more law schools this year, according to my modified Lorenz curve. The overall Gini coefficient is down trivially this year to 0.427. (You can read about what that means here.)

A Lorenz curve measures the cumulative distribution of a quantity in order from the recipient of the smallest amount to the largest. Usually researchers use the distribution of income among households. I’ve modified the Lorenz curve according to the U.S. News and World Report rankings for the previous year because the rankings are an independent measurement of law-school eliteness as seen by LSAT takers and applicants roughly at the time that they apply. Here is what I could cobble together going back to 2011. 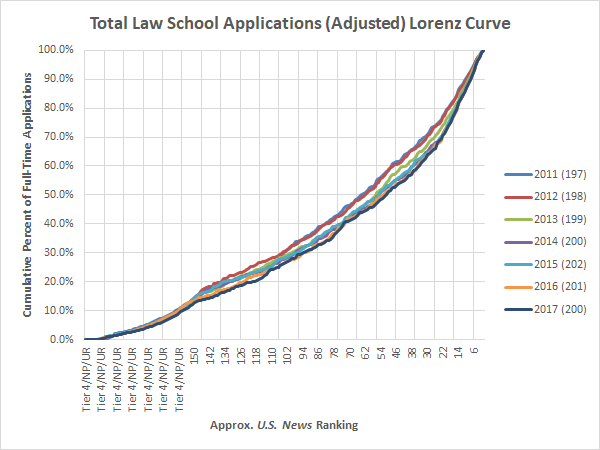 Given that applications were mostly flat this year, it’s unsurprising that there hasn’t been much change in the distribution of applications.

Next year, thanks to His Emolumence’s perfidy, we’ll have a kind of natural experiment of what happens when applications rise after everyone’s been told that law school is a bad idea. Will unheralded law schools benefit from the bump, or will our idealists apply strategically to top law schools? Will Grad PLUS loans go the way of the full-time matriculants? Find out next year.

This post consolidates information from multiple posts over previous years. You can read prior coverage at the following links.