The ABA’s standard 509 information reports are out now. Unlike last year there is no need for preliminaries about the data. The names of the law schools line up for the most part, so users do not need to worry about combing around for Lincoln Memorial or some other new law school. They might, however, want to download reports for Hamline and William Mitchell because some calendar-year 2016 data were separately reported before the Mitchell|Hamline merger officially went into effect. As of now, there are no reports for Rutgers-Camden and Rutgers-Newark, so now Rutgers is one.

In calendar year 2016, there were 33,075 full-time matriculants to 201 ABA-accredited law schools, up 468 matriculants from 2015 (+1.4 percent). That year saw an 838-matriculant decline, so the crunch has reversed for the law schools. (These figures exclude the three law school in Puerto Rico, as I usually do.)

Full-time applicant acceptance rates are largely flat, except at the 90th percentile. 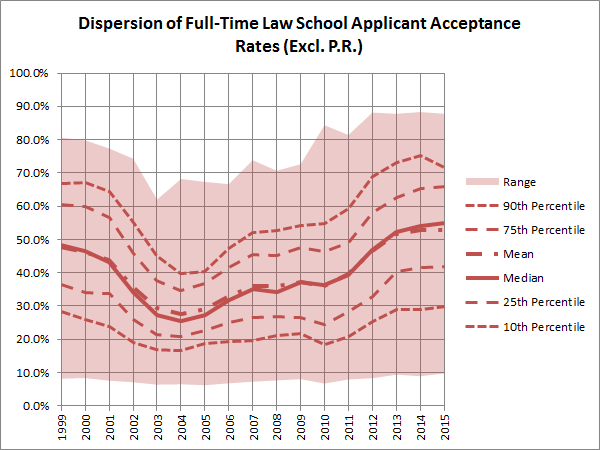 Matriculant yields are up to 24.1 percent overall compared to 22.9 percent last year, but ultimately about 21 law schools account for half of the decline in matriculants since the last trough year, 2007, which I believe is a better comparison year for this measure than 2010, a peak year.

102 law schools saw a growth in applications, which is much higher than last year. First place goes to (and you’ll love this) … Indiana Tech (235.4 percent), which will close at the end of the academic year. It received 332 applications, extended only 128 offers, and admitted but 39 full-time students. Indiana Tech’s 75th percentile full-time applicant received a 152 on the LSAT. It preferred to close than accept 204 applicants (~60 percent). Numbers two and three for application growth were Florida (98.9 percent) and Concordia (71.0 percent).

Before anyone gets excited about rising law-school applications, though, I note that 72.5 percent of the rise can be attributed to U.S. News‘ top 14 law schools. Thus, things probably don’t look any better for most schools since last year. In the last two years, I’ve commented on the possibility that applicants believe that now is the best time to go to an elite law school, and while that sentiment dissipated last year, it’s back now for sure.

More on these topics later.

Here’s information on enrollments from prior years: