Following up on Wednesday’s post on neoclassical economics gone wrong, we have the University of Arizona loudly announcing a 10.7 percent tuition cut for in-state students. That’s $27,288 in 2012 down to $24,381 in 2013. The last time Arizona’s tuition was this low was … uh, 2010 when it was $23,540. In fact, Arizona’s mean nominal tuition increase since 1999 has been 16.2 percent, which is certainly due to state funding cuts and not academic bingeing. This is why I focus more on private law school tuition increases.

The painfully obvious question the first-publicized “big” tuition cut raises is, Will it persuade more people to apply (and attend)?

Answer: Not nearly to the extent that the dean interviewed by the NLJ hopes, but Brian Tamanaha makes a good point that it might help UA poach some applicants from ASU, which isn’t a great victory since applications are dropping there too. Instead, Arizona intends to “make up for the lost revenue by expanding existing master of laws and doctor of juridical science programs [HA!] and introducing a new LL.M. for non-lawyers [BIGGER HA!]. It also plans to reduce its pool of scholarship money.” With less scholarship money, the price cut is even more likely to be a non-event.

Why won’t this entice the swarms of 0Ls? you ask? Because people like Eric Posner wrongly believe that the elasticity of demand for legal education is static throughout time. (Did I mention I loathe neoclassical economics terminology? It’s so stilted.)

So yes, until 2010, you could increase law school tuition and people would still apply. Did I mention that you can increase tuition after 2010 and people will still apply? (Okay, it’s probably lower on average due to scholarships, blah blah blah.) 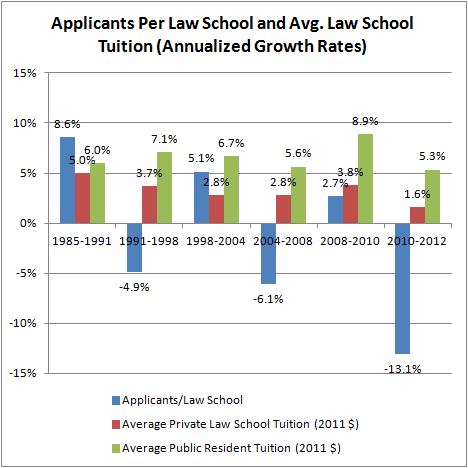 According to what I’ll call the “conventional thought,” applicants are insensitive to tuition hikes, yet the opposite is also simultaneously true: Make law school cheap and the deans will have to stand at opposite ends of a console, and then turn their keys simultaneously to open the weapons locker containing all the pitchforks they’ll distribute to the green professors to fend off the insatiable hoards of 0Ls demanding to pay someone a six-figure salary to tell them the difference between the parol evidence rule and the statute of frauds. If law school isn’t expensive, the “conventional thought” warns, it’ll be like WarGames meets Zulu.

However, the “conventional thought” suffers from a flaw: The 0L hoards only came because there was just about no way for them to know the net present value of a law degree minus that of their college degrees. Then along came a bunch of scamblogger types who said that it was probably negative, and the 0Ls realized the solution was not to play.

Take it away John Bates Clark and Alfred Marshall: Not only is demand for legal education dropping, but also the price elasticity of its demand is shifting.

For illustrative purposes only. I’m not an economist; I just play one on the Internet.

If you think that an upward-sloping demand curve hints that I think legal education was once a Veblen good (and possibly a Giffen good too), you have gained wisdom grasshopper. The question is to what extent that’s still true.

The other reason no one should take the “conventional thought” too seriously is that law school tuition has never been uniform throughout the country. For example, we’d expect dirt-cheap law schools like the University of D.C. or New Mexico to be overflowing with students. Instead, Georgetown, NYU, Harvard, American, Columbia, and George Washington have some of the largest student bodies in the country and aren’t known for their bargain-bin prices.

We’d also thus expect price competition among law schools, especially in California where you can become a lawyer via correspondence programs. If you object that ABA degrees are a separate class of goods from those of the unaccredited mills, you’ll have to tell me why that should matter. A lawyer is a lawyer, and the ability to pass a bar exam is largely set in stone before one has taken out one’s number two pencils at the LSAT center. If the fact that UCLA charges more than $45,000 per year for its law degrees has nothing to do with its (perceived) reputation for placing people in good lawyer gigs—and 0Ls perception of how many good lawyer gigs there are, the likelihood that they’ll get them, etc.—then you too are ready to start editorializing on economics.

Just be sure to wow your readers by using “at the margin” every third sentence.