By October 2018, there were 37,052 enrollees at 200 ABA-accredited law schools not in Puerto Rico. This is up 1,290 (+7.9 percent) from 35,762 in October 2017. (Last year, the initial reporting had 35,381 enrollees, so there’s been significant upward revision.) This year marks the first “clean” comparison between two enrollment cycles because the ABA adopted the October-October standard last year. In 2018, one law school, Valparaiso, dropped to zero enrollees. It had 28 last year. Miraculously, Arizona Summit submitted a report. It had 65 applicants and 17 enrollees (49 last year). Thus, neither of these law schools hampered the upward trend in enrollments much.

Moving on to applications…

Predictably, with more applicants acceptance rates are lower this year. The median law school accepted just less than half of everyone who applied.

Applicants showed more interest in some law schools than others this year. The Gini coefficient for applications among all 200 of these law schools is now 0.442, which is 1.4 points higher than last year (0.427). By contrast, back in 2011 it was only 0.357. (You can read about what that means here.)

Some of this increased application inequality is even visible in my modified Lorenz curve, a measure that typically measures the cumulative distribution of a quantity in order from the recipient of the smallest amount to the largest. Usually researchers use the distribution of income among households. I’ve modified the Lorenz curve according to the U.S. News and World Report rankings for the previous year because the rankings are an independent measurement of law-school eliteness as seen by LSAT takers and applicants roughly at the time that they apply. Here is what I could cobble together going back to 2011. 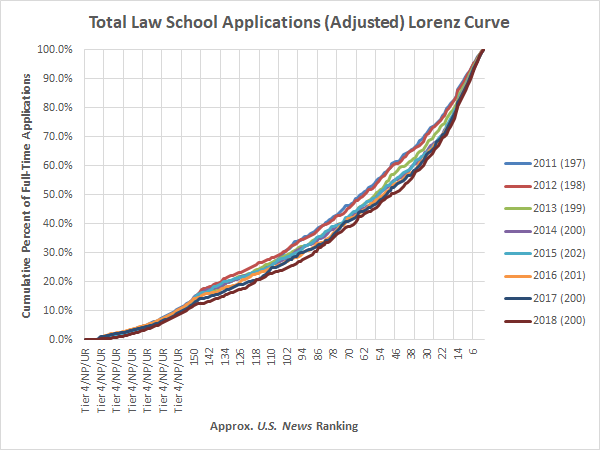 Last year, I asked, “Will unheralded law schools benefit from the bump, or will our idealists apply strategically to top law schools?” The answer appears to be no followed by a yes. The U.S. News rankings can be quite volatile further down, but not so much between chunks of 50, at least for this year. It appears that the average top-50 law school received 14 percent more applications than in the 2017 October cycle. The next 50 reaped a 12.7 percent increase, but the remaining saw almost no benefit of the Trump bump on average. In short, for law schools below 100 it’s business as usual, i.e. slow.

Information on this topic from prior years: