On October 24th, the Bureau of Labor Statistics released its employment projections for the next cycle, 2016-26.

For 2016, the BLS Employment Projections program (EPP) estimates that there were 792,500 lawyer positions (as opposed to discrete lawyers) in the United States. This figure includes self-employed lawyers. In 2014, the EPP found 778,700 lawyer positions, so there has been some growth between the two years. According to the BLS’s Current Population Survey (CPS), in 2016, 1.133 million people worked as lawyers in the United States. The discrepancy between the CPS and the EPP has existed for some time. In their respective contexts, both figures are correct.

The BLS projects future employment trends in part to help job seekers evaluate career choices, and the projections play a significant role in the BLS’s Occupational Outlook Handbook. Here is an illustration, from various sources, of law-school graduate and lawyer growth since the 1980s. 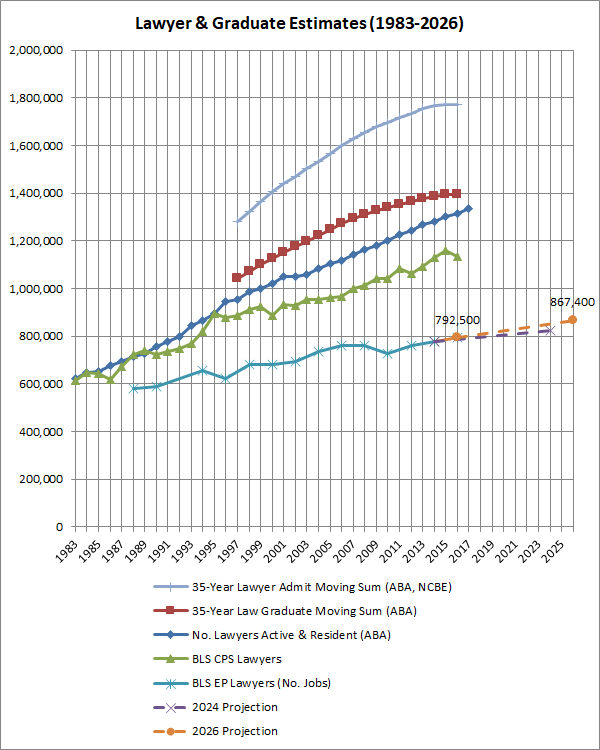 According to Table 1.10, between 2016 and 2026, the BLS estimates a total 419,000 net lawyer jobs will be created (41,900 in the average year). Of those, 74,800 (18 percent) can be attributed to economic growth over the decade, up to 867,400 lawyer jobs total in 2026. The amount of new job growth is higher than the 2014-24 cycle (43,800). The remaining lawyer jobs, 334,000, consist of “occupational separations,” which includes 165,000 lawyers leaving the workforce and 180,000 lawyers transferring to different jobs. Like all other occupations, lawyers leaving the labor force may be retiring or temporarily exiting for personal reasons, and lawyers transferring to other occupations may be moving up or down the occupational ladder, e.g. judges or retail clerks.

For the 2014-24 cycle, the BLS estimated that only 157,700 lawyer jobs would require replacement. The large discrepancy between those projections and the current one (334,000) is not due to a sudden shift in the legal profession’s employment prospects; rather, it reflects the new methodology the BLS adopted for estimating occupational replacements. From the 1991 to 2024 projections, the EPP used a “cohort-component” methodology for estimating job openings due to replacements. For example, if in 2016 there were 50,000 lawyers in the 56-65 age cohort, and 60,000 lawyers in the 46-55 age cohort, then it would project that 10,000 lawyers between those two cohorts would leave the occupation and would require replacement by 2026. Add together the differences among all the age cohorts, and one has the net replacement rate.

The BLS abandoned this methodology because it suffered from sampling errors for small age cohorts and assumed that the only workers who needed replacement were older workers. Starting this year, the BLS adopted an “occupational separations” methodology for estimating job openings. It uses historical data on workers who have left the occupation, identifies common characteristics among them, regresses those characteristics, generates a probability of separation for the whole occupation, and then applies that to the occupation. As a result, the EPP now detects lawyers who change occupations before middle age. While the results give a higher number of annual job openings than before—especially as compared to the number of new law-school graduates or bar admits—they also indicate a substantial amount of turnover in the legal profession: 180,000 out of the base 792,500 (22 percent) lawyer jobs.

Here are more links for information on the EPP’s methodology for estimating occupational replacement needs and occupational separations and openings.

Evaluation of the BLS’s Separations Methodology

After I first discussed the BLS’s new methodology for measuring occupational separations, I found the agency’s prototype data that distinguished replacement jobs as either “labor force exits” or “occupational transfers.” I found that one in four lawyers would switch occupations between 2012 and 2022. The EPP now includes this information in its regular tables (Table 1.10), and I think it’s important to compare this information, at least this time, against occupations requiring similar amounts of education because it is no longer prototypical and it illustrates the reliability of the data, one way or the other. These are sorted by occupations’ 10-year cumulative separations as a percentage of their respective 2016 employment levels.

Two things jump out to me. One, the occupations’ separation rates tend to clump together by job type. Medical professionals are at the bottom. Legal professionals are near the bottom, and nearly all the rest are postsecondary instructors of one type or another. Scientists are at the top. Two, I personally don’t see some of these turnover rates as plausible. Is there really this much churn in astronomers? Three, the rate of occupational transfers looks high overall. Do 11 percent of all surgeons switch jobs every ten years? I would think these rates would be much lower, but maybe there’s more to professional work than I know about.

Concurrently to the employment projections, the BLS published its biennial Occupations Outlook Handbook (OOH). I’ve tracked its statements about job prospects for the legal profession going back more than two decades. It’s almost always negative, but this year—despite the employment projections depicting more job openings than before due to the new methodology—the OOH has not changed its position. It even appears blunter than in the last several years. I’ll copy the text in full.

Despite the projected growth in new jobs for lawyers, competition for jobs should continue to be strong because more students are graduating from law school each year than there are jobs available. According to the American Bar Association’s National Lawyer Population Survey, a compilation of data collected by state bar associations or licensing agencies, there were over 1.3 million resident and active attorneys as of December 2016. Some law school graduates who have been unable to find permanent positions turn to temporary staffing firms that place attorneys in short-term jobs. These firms allow companies to hire lawyers as needed and permit beginning lawyers to develop practical experience. Many other law school graduates and licensed lawyers end up finding work in other occupations or industries due to the difficulty in finding jobs with traditional legal employers.

Because of the strong competition, a law school graduate’s willingness to relocate and his or her practical experiences are becoming more important. However, to be licensed in another state, a lawyer may have to take an additional state bar examination.

While many new lawyers are hired each year by law firms, this does not guarantee stable employment in the profession. Newly hired lawyers, known as associates, must either advance within their firm or may be forced to leave, a practice commonly known as “up or out.” Those who leave law firms may find work as in-house counsel with companies, with government agencies, or as self-employed lawyers.

Why? One, 2016 law grads’ employment outcomes are not markedly better than before. If the change in methodology showed better outcomes, then more than 63 percent of law grads would have found full-time, long-term work in the profession.

Two, although the new occupational separations methodology may not be very precise, it nevertheless indicates significant turnover in the legal profession. Now, we don’t have data on where these lawyers end up, but this is a risk prospective law students should know about given the debt they incur for their legal educations. The legal profession is seen as a terminal career choice, so the onus is on law schools to demonstrate that post-law careers are equally worth the pay off. And don’t get me started on JD-advantage jobs again.

Finally, the OOH is not deterred by the change in methodology. Its analysis doesn’t differ much from before, and where it does differ it rejects the JD-advantage argument and cautions against biglaw.

My comprehensive explanation of the various measures of law-school grads and lawyers can be found on this page (updated!). It also should contain any links I may have omitted in this post.