Discussions of law-school costs are incomplete if they do not account for discounts some students receive, usually merit scholarships paid for by their full-tuition-paying classmates. To analyze the phenomenon of discounting, I focus on the ABA’s 509 information reports’ scholarship data. This information lags the academic year by one year, so as of the 2018-19 academic year, we now have data on 2017-18.

At the average law school not in Puerto Rico in 2017, the proportion of full-time students paying full tuition rose by 0.4 percentage points from 25.4 percent to 25.8 percent. At the median law school less than one quarter of students pay full tuition.

The proportion of students paying full tuition has fallen considerably over the years. At the turn of the century, more than half of students paid full cost; now about a quarter do. 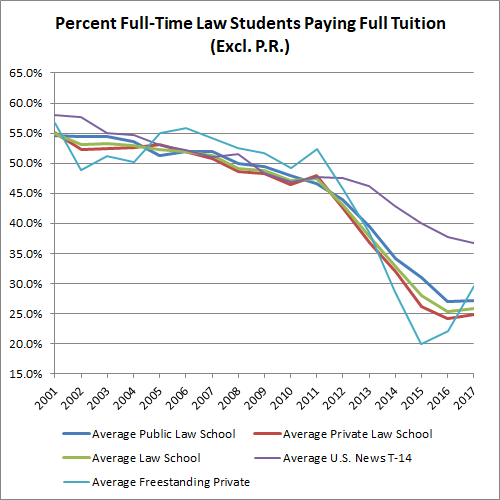 At private law schools, which are easier to analyze because they don’t price discriminate in favor of resident students, the average number of students receiving grants ranging between half and full tuition again exceeds the number paying full tuition. Many more receive a grant worth less-than-half tuition, though their numbers are diminishing.

One advantage of knowing how many full-time students pay full tuition is that we can estimate the total revenue they generate for private law schools, except Brigham Young University, which charges LDS students less. 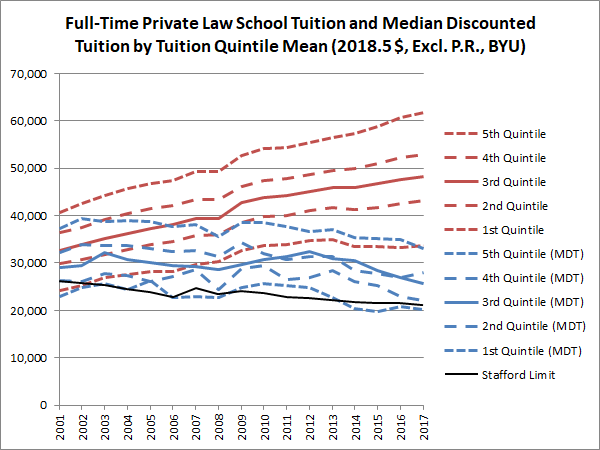 We find that while full tuition inexorably climbs upward and disperses, the MDTs are trending downward and together, indicating significant discounting. Notably, the MDT at the most expensive law schools is about as much as full tuition at the cheapest private law schools.

That’s all for now; on to the shaming and ridiculing.

Honorary mention goes to the ABA Section of Legal Education and Admissions for the Bar for discontinuing reporting full-time and part-time student enrollment each year. Leaving it to the grant and scholarship data means that there isn’t a good way to double-check law schools’ errors and discontinues a dataset it’s reliably collected for decades.

Information on this topic from previous years: